Elijah Hinchcliffe was 37 when he died, he had been on death row for 15 years and last Saturday at 7:11PM he was pronounced dead by lethal injection.

Elijah was arrested in 2002 for the murder of a police officer. What had started as an armed robbery of a convenience story went horribly wrong after he had entered alone holding a pistol, demanding staff open the cash register and leave. What he hadn’t planned for, however, was that in a moment of quick thinking, the staff locked the front door and shutters, while he was busy grabbing the cash.

For 20 minutes Elijah attempted to get out. He tried shooting the lock, and even begged for his freedom.

When the police arrived they were armed with pistols and shotguns. Elijah was sat in a corner, gun facing the door. He was talking to himself; “I can’t go to prison, I can’t go to prison”. The police unlocked the door and went in, guns drawn, covering corners. Upon finding Elijah, officer Ben Coe was shot in the stomach, he was taken to hospital and 6 hours later would die from his injuries. Elijah received the death sentence.

His execution had been delayed and delayed over the course of the last 10 years, however, after the expiration date of various chemicals for the injection were nearing, his execution was fast tracked to last Saturday.

There was quite a mix of people in attendance. A mix of pro and anti death penalty protesters. A mix of anger and sadness. I spoke to one woman who had met Elijah, she told me how “He’d had a troubled youth, life dealt him a bad hand and he shouldn’t be killed for it.” She would later rally up a small crowd of protestors to shout “Life without parole!” on repeat.

On the other hand, we were kept separate group of pro death penalty protesters. People who had come to see the job was done. If you’re hoping to hear about arguments and fights, you won’t find it. These were kind people who I was able to talk at length with. One man in particular, who had no relation to anyone involving the crime told me;

“I don’t care who you are, or where you are from, you murder a man who was dedicating his life to the safety of others, you don’t deserve to live”. 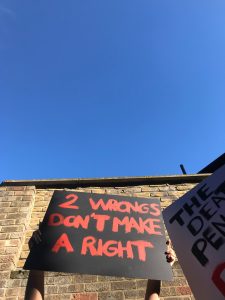 It was an emotionally heavy day, but after Elijah’s death was announced, silence fell from both sides.